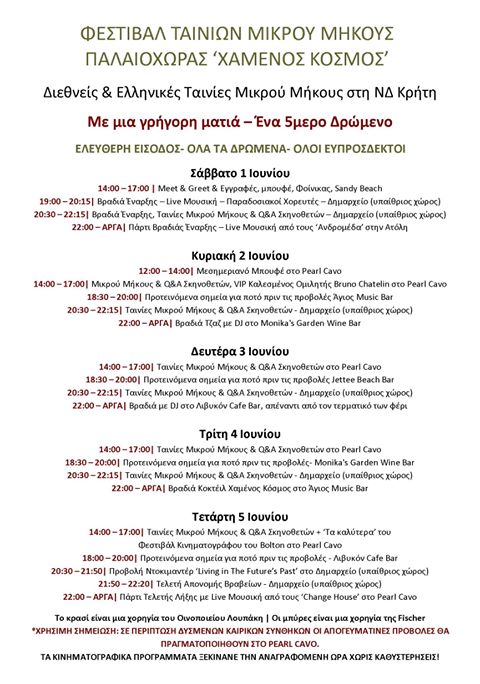 With over 350 film submissions resulting in 67 Officially Selected films from 19 countries, we are delighted to announce that many of our International and Greek filmmakers & directors have confirmed that they are travelling to Paleochora to participate in the Festival!

Our annual Film Festival aims to bring a dynamic selection of International and Greek Short Films to our wonderful location in SW Crete, as well as establishing a regular annual meeting point for filmmakers and Film Industry representatives alike. The festival audience will consist of an eclectic mix of Filmmakers, Film Industry veterans as well as locals, incidental International tourists and visitors to the region. With that in mind, our main focus is to programme films that demonstrate great Universal storytelling with a wide audience appeal.

Paleochora is famed for its laid back, chilled out charm and the LWSFF event will reflect these qualities. Evening screenings will be held under the stars in the village Main Street, with daytime screenings held oceanside at the Pearl Cavo venue. This years parallel events will include a Keynote Talk from International Film Industry Veteran, Bruno Chatelin, CEO of FilmFestivals.com, as well as an array of Meet & Greet hospitality events supported by Live Music from ‘Andromeda’, ‘Change House’ & ‘Rainbow Touch’, traditional Dance & culinary highlights plus our LWSFF Awards, including Best International & Best Greek Short Film to be presented on the Closing Night of the event. Our beverage sponsors this year are Loupakis Vineyard Estate and Fischer Beer.

Paleochora is the ‘Lost World’ that gives our Film Festival its name. Set in an area of outstanding natural beauty, surrounded by the ocean and nestled beneath the Mountains, the town is accessed by a scenic drive from Chania in the north across the Cretan mountains to SW Crete. Many who arrive here for the first time do not want to leave, a great many never do!